Family Science — the scientific study of families and close interpersonal relationships — has a history spanning more than 100 years. Learn more below about:

The origins of today’s Family Science discipline tie closely to the beginnings of the National Council on Family Relations (NCFR). Starting in the early 1900s, scholars in several disciplines recognized the importance of focusing on family in their research. In 1938, the NCFR organization was founded as the National Conference on Family Relations, a professional association of members from multiple disciplines, which NCFR still is today.

As a “family field” emerged, NCFR cofounder Ernest Groves wrote in 1946 about the need for a “science of marriage and the family.” Pioneering scholars from disciplines and fields including sociology, psychology, home economics, theology, anthropology, and more began conducting systematic family research. They developed new research methods and family theories, creating a new perspective — different from the perspective of any other discipline. Professional practice areas emerged that specifically dealt with family, including Family Life Education and family therapy.

After decades of growth and advancement, an early-1980s article by NCFR leaders asserted the birth of a family discipline that had transcended other disciplines. An NCFR task force affirmed shortly thereafter that a “distinct and identifiable family discipline” existed. In 1985, 89 members at NCFR’s conference unanimously voted to endorse the term “Family Science” for the discipline.

"The unanimity of the endorsement was interpreted as a virtual mandate — further justifying subsequent action, such as changing the names of courses, majors, and eventually, departments around the country." —Task Force on the Development of a Family Discipline, 1987

Literature over the next 30 years further explored the identity and terminology of Family Science, and concluded that there was still a need to strengthen the identity, visibility, and credibility of the discipline. In 2014, NCFR assembled a Future of Family Science Task Force to reignite discussions and work around the future of the discipline. The task force of 2014–15 identified needs and generated ideas to bolster and promote disciplinary identity, visibility, professional development, and leadership, all of which informs NCFR’s ongoing work to advance the vision of Family Science.

Why the Term ‘Family Science’ Today?

In 1985, NCFR members endorsed the term “Family Science” for the discipline “where the primary goals are the discovery, verification, and application of knowledge about the family.” Other terms under consideration at the time were an existing term, “family studies,” and a new term, “famology.”

An NCFR task force in the 1980s gave several reasons for endorsing “Family Science” that still ring true. They wrote that the term is: 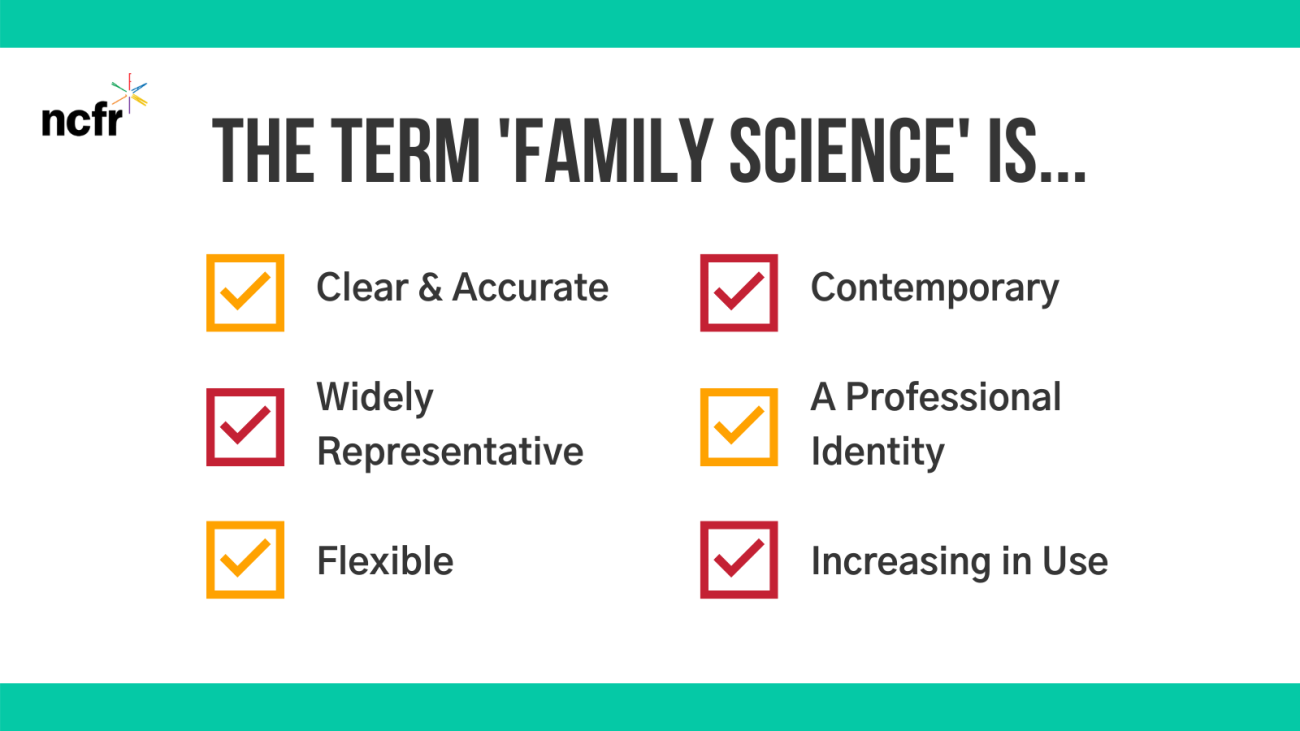 Today, the growing use of “Family Science” expands recognition and understanding of the discipline and its professions. It increases the credibility of Family Science work, as those in the discipline have developed a rigorous base of scientific knowledge and an evidence-based foundation for professionals who work with families.

A clear, widely understood identity provides a unified umbrella under which Family Science scholars, professionals, and students — and the NCFR organization — can most effectively promote their contributions. A collective identity also allows a discipline to set standards for scholars and professionals; in the case of Family Science, NCFR provides Ethical Principles and Guidelines for Family Scientists.

In more recent literature, NCFR members and Family Scientists have also explored the growing use of the general term “science” (particularly versus “studies”) in academic institutions. They have reflected on the need for a cohesive identity and broad recognition of the discipline's value for it to survive and thrive.

See NCFR’s Bibliography of Family Science as a Discipline for references and additional information.

Academic Programs: Use 'Family Science' in Your Name: These resources from NCFR are available to support representatives of academic programs in changing the name of their departments or programs to include the term "Family Science."

NCFR is a nonpartisan, 501(c)(3) nonprofit organization
whose members support all families through
research, teaching, practice, and advocacy.

Get the latest updates on NCFR & Family Science
in our weekly email newsletter: