In early March 2016, NCFR Board President Bill Allen invited NCFR members to participate in the first of several brief surveys designed to help the NCFR Board better understand members' views of NCFR and the work it does. This first survey asked for opinions on the approaches to research and policy that NCFR takes or might take in the future. A total of 505 members responded to the survey. More than half of the respondents were university or college professors, more than 80 respondents were students, and more than 200 practitioners responded. Among the respondents, 32% had been an NCFR member for five years or less, 23% had been a member for more than 20 years, and the remaining fell in between.

What Did We Learn? 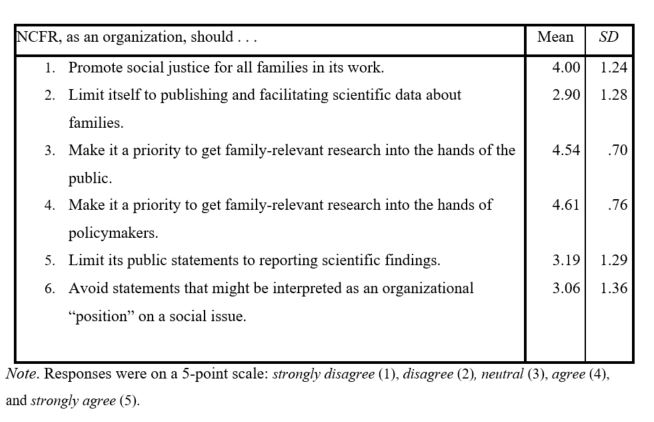 Most respondents (95%) fell into one of two broad groups. Group 1 strongly endorsed Items 1, 3, and 4 but was less supportive of Items 2, 5, and 6; Group 2 strongly endorsed Items 2–6 but was only moderately in favor of Item 1. Collectively, the close-ended responses show where there is consensus among NCFR members, particularly in the areas of dissemination of research to policymakers and the public. There also is considerable endorsement of the statement that NCFR should promote social justice for all families in its work. Although there was less agreement about limiting NCFR activities to publishing and facilitating scientific data about families and the nature of public statements made by NCFR, there clearly is room for dialogue about NCFR's policy-related activities.

Responses to the open-ended questions offered additional insights regarding members' views. There were 333 responses to a question on how NCFR can best use its influence to strengthen families, 183 responses regarding additional comments about NCFR and policy, and 96 "other" comments that respondents shared. The Board greatly appreciates the time that survey respondents took to think about NCFR's meaning for families and engagement with policy. To benefit from the open-ended input, a Board representative gave the responses an initial reading and placed into categories. Two qualitative researchers then read responses to check for fit with the assigned categories. A second pass was made using open coding techniques (focusing on the "thought unit"). A third pass was used to develop subthemes in each category (responses could belong to more than one subtheme). Responses to the open-ended questions yielded nine primary themes with a number of attending subthemes, as follows:

A large proportion of respondents also wrote about NCFR's informing of policymakers.

A sizable number of people noted the importance of connecting research and practice.

Speak Up and Stand Up for Families

Several NCFR members wrote about how NCFR as an organization is especially well equipped to speak up and stand up for families in all their forms and as concerns a variety of policies in which family experts are not as involved as they could be. Respondents offered examples of specific areas where NCFR could have such impact, such as paid family leave and child-care benefits.

A few people discussed the value of NCFR providing a safe place for dialogue.

A few people also noted that NCFR should help bridge diversity of perspectives.

Some respondents questioned the purpose of making position statements, yet a similar number of respondents warned of the consequences of not making them.

People mentioned different ways to facilitate social justice on a variety of topics and how it relates to NCFR's status as a premier family research and practice organization.

The Board is continuing to review the open-ended input and will use it to guide further dialogue with members. The Board is committed to hearing a diversity of perspectives from NCFR members, with the ultimate goal of promoting conversations among NCFR members to facilitate shared meaning and member consensus on the work of NCFR.

Get the latest updates on Family Science & NCFR in our weekly email newsletter: